Every year around the time of the fair, I have an opportunity to help 4H students with their rabbits. One task in particular is in high demand… tattoos!

Since ARBA requires that rabbits at a show be marked with a permanent, legible ear tattoo. This is so helpful in many ways, the main one being that rabbits tend to look a lot like one another! (I have sworn I could pick out our rabbit for specific characteristics, and then gotten the rabbit on the table and realized that I have no idea which is ours!) Permanent tattoo markings are a safety net to the original breeder (no one wants to think of it, but a distinctive tattoo keeps rabbit breeders honest when they might be tempted to buy a new rabbit and fudge a little, calling it one of their own breeding), to a buyer (I’ve had people contact me with a rabbit they bought from someone else and been able to track down a pedigree years later based on our distinctive tattoos), and it isn’t harmful to the rabbit.

However, actually tattooing a rabbit can be a concern to many people. What equipment do I use? How do I do it? How do I make sure it’s legible? These are common questions! There is a lot of diversity within preferences, but I’m happy to share the things we’ve found to be really useful for our own rabbitry.

The Bunny Burrito. Obviously, this isn’t an official name, but I use what I call a bunny burrito to hold the rabbits in place while I tattoo. I started out using a towel wrapped tightly and it worked… but then a friend got out of rabbits and I inherited the burrito. This wrap is made of fabric and has three hook and loop fasteners to hold the rabbit in place. IT IS AMAZING.

Because I inherited this lovely piece of equipment, I had no idea where it was purchased. Then, randomly, I saw a post on facebook the other day and found the original source! It’s a Wrap-n-Tat! I promptly ordered new Wrap-n-Tats in a smaller size (since our original was made for big meaty buns and now we have some super teeny little ones) and I am so charmed by the fabric and the durability of the workmanship!

Obviously, one of these has been used A LOT and two are brand new… but don’t worry – I’ll be breaking them in shortly!

KB Tattoo Pen. There are a lot of choices when it comes to tattoo pens (or clamps) but we chose to go with the KB Tattoo. I’ve tried others over the years and have never found one I like better. For the price and the quality it can’t be beaten. I’ve replaced the batteries twice and needles once in six years. That’s not a bad deal! I’d also recommend getting the ink that they sell with the pen – I’ve tried other inks and the tattoos have faded quickly or never even seemed to really stick. 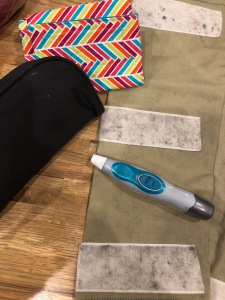 Healing Ointment. After every tattoo I blot the ink off of the tattoo and then dab a little ointment on it. Sometimes I use Aquaphor and other times Bag Balm… I imagine Vaseline or almost any healing ointment would work just as well. I just think it helps the tattoo heal better.

A few more tips for the beginning tattooer:

Banana. I have recommended that before tattooing for the first time, tattoo a banana. The flesh of the banana helps give you an idea of how hard you’ll need to press down to get a clear tattoo.

Be Bold. When you decide to tattoo, fully commit. Do it quickly and firmly. If you are tentative the rabbit will likely give you grief whereas if you tattoo confidently you will be done with the tattoo in a jiffy.

Tattoo System. Choose a tattoo system that is identifiable to you and your rabbitry. For us, our breeders always start with a letter “H”. (If you’d like to know about our tattoo system this blog post goes into it in more detail, The Quirky Art of Tattooing