When the Show Must Go On… (Or, how do you take care of the animals when you’re sick yourself?!) 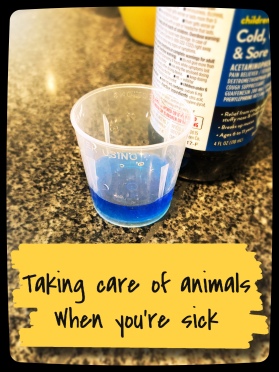 What do you do when you’re sick but the animals still need daily care?

One of the worst things about raising animals is how they are so darn needy on a daily basis. Seriously – they want food. They want water. They need milking. They need grooming. It’s just so… regular.

I’ve been thinking about this a lot this week because our family has been hit hard by some type of sickness that’s going around. It’s been about a two week period and it’s cycled through all six of us. Assuming it doesn’t offer the pleasure of a repeat round I think we’re about three days from being totally done of it…

And all during this time we’ve still had to feed and water the rabbits. Milk the goats. Collect the eggs.

Animals don’t care a whit if you have a 103* temperature and chills.

Fortunately in our case the sickness we’ve had has been staggered so there’s always been someone healthy enough to do the chores, but it reminds me of the stories of early pioneers who were found dead in their tracks on the way to the barn while the rest of their family is dead in the bed. The last one standing in that situation was obviously overcome with the immensity of it all.

My goal in sharing this was actually not to be depressing and speak of death, doom, and destruction, but to point out the need for a plan when things go bad.

We know that life is always going to through curve balls at us – so when it comes to our animals, how are we prepared? Who is your back up to call and take care of the fur babies if you’re suddenly ill? On vacation?

This has been the greatest discussion in our family when our daughter first brought up wanting dairy goats. We know that with a milking animal our schedule will be much more limited and our travel adventures will slow down. However, we’re moving into a season of our family where that fits… so we can make a sacrifice of time and effort for this season.

How are you prepared for an emergency?

In response to our growing microfarm adventures, I’m taking another look at our emergency plan (initially created after I wrote this post a few years ago) and making sure it’s up to date. My plan is to turn it into a fillable .pdf and make it available to all of YOU so your leg work in creating your own plan is a little less stressful. Hopefully it will be out by the end of next week!

In the meantime, may your animal adventures be calm and that Murphy’s Law thing stay far away from you!

I’d love to hear from you about how you handle emergencies and travel plans! I feel like we should create some sort of a web-based service (like the Babysitters Club) where people could schedule others to come and cover chores!

Gardening with Rabbits in Mind

This is the first summer, ever, that we’ve made any sort of an attempt to garden.

Baby steps, friends, baby steps. We’re the ones who get excited when a houseplant lasts more than three months.

However, we’re in the middle of a huge remodeling project and we need activities to get the kids out of the house and container gardening seemed to be a brilliant idea. So far it’s been three days worth of planning, excitement, and dirty filth as well. Win for everyone! (Except the floors.)

We have another consideration as we attempt to garden this year: the rabbit.

We recently retired a fantastic Silver Fox mama, Eclipse. She’s been such a great rabbit for us that we don’t have the heart to move her along permanently —  yet since we’re a small rabbitry we really need the cage space for animals that are earning their keep! We gave it a good deal of consideration, checked the fence line for security, and turned Eclipse loose in the backyard. We’re fortunate that we have a fairly large backyard totally enclosed by a secure 6′ privacy fence so this is a reasonable option for us to consider. So far Eclipse has put the miniature poodle in its place and the Great Dane seems a bit gun shy as well when faced with the 12 pound rabbit with an attitude! To recap, everyone’s getting along great and we now have our first official, pet-only rabbit.

However, we don’t want Eclipse eating the fruits of our labors before we ever become real gardeners and taste the sweet taste of victory ourselves! So… what to plant?!

Google, come, be our friend….

A quick search on the internet tells me that these plants offer no allure to a hungry rabbit. We’ll be planting some… I’ll let you know how the gardening goes at the end of the summer. Or, if she eats everything we’ve got down to the ground I’ll probably complain about it sooner!

I also came across this lovely article on Controlling and Deterring Rabbits in the Garden. This website compiled a list of plants that rabbits DO like to eat.

With no further ado, a compiled list of (possibly) rabbit repellent refreshments and tips, as reported by people who have way more gardening experience than yours truly:

The rabbit watch is still on. Duchess has not had her babies yet.

That doe is going to give me a heart attack.

In honor of learning about the rabbit, here are 10 random facts (and my own commentary!) about bunnies:

1. It’s not just a hot dog. Until the 18th century rabbits were called coneys, based on the French cunil, shortened from the Latin cuniculus. “Rabbit” first referred to the young of coneys until eventually the word took over in popularity. Incidentally, this is also the origin of the name Coney Island or Rabbit Island, the beachside amusement park in New York. It is one of the only references to coney that is still used in North America.

2. Stephen King isn’t the only Fang. Rabbits teeth never stop growing. If their jaws are misaligned, the non-matched teeth won’t grind down and can cause major injury, even death.

3. They have blurry indigestion. Rabbits are nearsighted and they cannot vomit. Those are two completely unrelated facts that might save you when you’re on Jeopardy. You’re welcome.

4. Shipwrecked. Hundreds of years ago Phoenician sailors discovered rabbits in Spain. In fact, “Spain” could mean “land of the rabbits.” The Phoenicians loved the little breeders, loaded them on their ships, then stopped at various deserted islands and let them loose in hopes of giving shipwrecked sailors a reliable food source.

6. They’re the original Native Americans. Rabbits and hares commonly found in the United States of America include the cottontail, jackrabbit, snowshoe rabbit and the domestic rabbit. There is a difference between a hare and a rabbit, although they can be crossbred.

7. The Brits like them. In England rabbits have become the third most popular pet (after dogs and cats). This makes sense, because they can be litter box trained and they don’t expect you to be subservient to them à la the feline. However, keep the water bowl filled, a 4-lbs. rabbit will drink the same amount of water as a 20-lbs. dog.

8. They’re cinematic. I watched the movie Harvey once. Harvey, the six-foot-four invisible rabbit companion “pooka” to eccentric man Elwood P. Dowd (played by James Stewart) displayed some thought-provoking behaviors. I still don’t get the movie, however.

9. Big Ears. Rabbits cool themselves using their ears as a ventilation system. Because of this, rabbits born in the summer may have “summer ears” – non-genetic growth that produces big ears.

10. You’re so vain. Rabbits are compulsive groomers and spent the majority of their day in various stages of grooming. They also lose their hair several times a year in a process called “molting.” Mama rabbits develop a huge, goiter-looking lump of fur called a dewlap, which they pull out to line their nest when they have babies.

Now, don’t you feel smarter about the lagomorph? Do you have any rabbit facts to share?