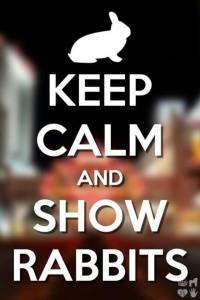 There was a really big rabbit show this weekend, Ohio Mini Convention. People from literally all four corners of the country gathered to show off their bunnies, but something else really interesting happened – they renewed friendships, caught up on life, and (contrary to what some might imagine happens at a show) admired the quality animals on the show table simply because… a well-formed rabbit is a thing of beauty.

One of my friends posted on facebook, “It’s almost impossible to explain to ANYONE why you show rabbits. Why you drive hundreds of miles and spend a lot of money so someone can give you their opinion on your rabbit that you are most likely going to keep loving no matter what.

“It’s about feeling part of a community, feeling like you belong even though you all come from different places, occupations, upbringings. It’s acceptance. It’s laughter. It’s getting to know and care about someone you might not have ever met any other way. I am humbled by the kindness. I am even more thrilled that it still exists.”

When I read this, I can’t lie, my eyes got a little watery (or perhaps I was just preparing to wash my face like a caveman… either way, I was moved). Those words my friend wrote are true.

I look back to our very first show, when we attended wondering what on Earth kind of wierd people would spend an entire Saturday in a barn with rabbits?! It didn’t take long for us to see the value in an environment that offered all sorts of people coming together for their quirky hobby. We were hooked.

This past January our state show secretary became life-threateningly ill. I was talking to my husband about it when our 8-year-old daughter came up. “Ms. Joan is sick?” she asked. “Yes, very,” we replied. That night… and every single night until Ms. Joan was released from the hospital, one of the kids would pipe up during prayer, “And God, please protect Ms. Joan and heal her body and let her know she is loved.”

When we attended Arizona State Convention, people had buttons made to support her, a larger-than-life-sized get well card was passed around, Ms. Joan’s first facebook post on the state group was greeted with responses that involved many exclamation points. We have become family.

Rabbit people tend to be good, compassionate people. I have seen support raised for rabbit families in car accidents, fires, etc. This strange grouping of people who love their furballs has managed to create something that is hard to find in our current culture of status updates and sanitized photo opportunities: community and relationship that stretched across differences.

One sign we saw at the National ARBA show this past year? “For five days you don’t have to explain to anyone why you raise rabbits.” Admittedly, it’s a funny hobby, but man, it’s one worth exploring. Yes, it takes a bit of time to get to know people, and a willingness to carry on conversations, but our favorite aspect of rabbit shows has become the people we meet and the conversations taking place around the tables. Try it! 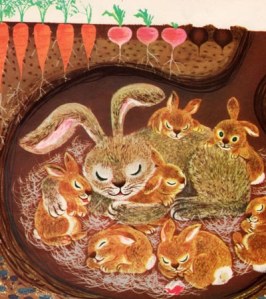 I don’t mean to get so involved in Duchess’s birthing process, but it’s her first litter and, well, I get excited when there are baby bunnies floating around!

Duchess is not cooperating. I put more alfalfa hay on the floor of her cage in hopes she’d gather it up and put it in her nestbox… she didn’t.But she did enjoy her tasty snack!

I’ve spent the last two days searching the internet for information on how you can tell your rabbit is about to give birth. Here’s what I’ve learned:

1. Every rabbit has a different gestation length. The average length of a rabbit pregnancy is 31 days, although the range is 28-35 days. Let me tell you, the difference between 28 and 35 days is a l o n g time when you’re checking your rabbit every few hours!

2. Pulling hair is spontaneous. Some rabbits will pull their hair and prepare their nestbox several days in advance. This is a well-prepared, type-A rabbit. Then there are the free-wheeling, fun loving rabbits who pull their dewlap fur an hour before birth. Ellen of Sky Island Livestock told me she has does who will pull their hair as they are giving birth. Talk about procrastination!

3. I’ve got a bad attitude. Duchess is a sweet, shy rabbit. In the last week she’s been ridiculously jumpy and grumpy. When we put her next to a buck she began to growl and try to fight him through the cage wire (we quickly moved the buck to different quarters!). Today when I tried to give her our daily scratching she frantically hopping through her 4’x2.5′ cage like I was a demon after her soul. She is not herself. (Frankly, I’m not myself during the last bit of pregnancy, either!!)

4. Test mating might get you more than expected. We bred Duchess, then did a test breeding on day 12 to see if she was pregnant. Turns out the mating activity will stimulate one side of ovaries at a time – and the “test mating” recommended by so many people might actually trigger a second fertilization. Let me put it this way: a rabbit is capable of carrying two pregnancies, simultaneously! So there’s a chance Duchess is about to deliver a litter… and in two weeks she’ll deliver another! I’ll let you know how it goes.

5. When in doubt, send up a prayer and wait. The reality? I can do absolutely nothing to help Duchess right now. Once she births there’s a chance I can save the kits if she has them on the cage floor instead of the nestbox. Still, it’s a waiting game. Those babies will come when they want to come and I’m along for the ride. Patience, patience, patience. I’m developing this virtue!

Do you have any stories of first time rabbit deliveries?