Can You Feel The Love Tonight? 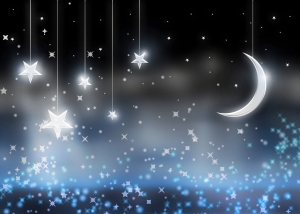 As silly as it may seem, sometimes rabbits don’t… breed like rabbits.

I often hear complaints about a doe that won’t lift or is otherwise reluctant to breed. This is not necessarily uncommon and can be a factor of age, weather, or general temperament. Most often a buck is more than willing to oblige but occasionally you run into troubles with your mister refusing to be a “kisser.”

There are some fairly standard recommendations for getting your rabbits “in the mood”:

But just this month we came across a totally new (to us) method – breeding by moonlight.

Since rabbits are fairly nocturnal it’s not a surprise that they are more active at night. In warm weather we sometimes sleep with our windows open and the noise the rabbits make playing with their toys and thumping around can be quite noticeable. (They’re no match for an antsy barking dog or a cat in heat, but for a rabbit they’re loud!)

Rabbits are lively at night!

Just this month we got home late and remembered that we needed to breed a few rabbits in order to plan their due dates around some travel plans next month. So, even though it was fully dark, we decided to head out to the rabbitry and see if we could get some dirty business started.

What a shock! Those girls were so ready it was as though their backsides were attached to rockets! We had such immediate success by moonlight fraternization we even attempted to breed a few of our most reluctant ladies — and they were quite happy to oblige!

This was such a blatant change of pace that it’s another trick we’ll be adding to the options for what to do when your doe isn’t interested. After all, everybody loves a little late night romance, right?!

*We will continue to use the moon calendar for our breeding programs. Here’s the link to a 2014 moon breeding calendar!*