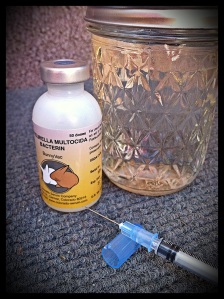 Today, after a lot of thought, we vaccinated our herd against pasteurella using the Bunny Vac from PanAm Labs. (Here’s a Q&A with Bob Glass describing how the vaccination works.)

I’m a little nervous about this, because we are inherently against using any non-organic substance with our rabbits. However, we discovered we really like to show our rabbits and we’ve invested a bit into getting great quality show animals. The risk of having a chance sneeze from another bunny undo the work we’ve been doing just isn’t worth it.

Plus, every time I hear a sneeze my heart stops in my chest. To be fair, we’ve been experiencing 35 mph -50 mph winds around here and you can see the dust in the air everywhere… but I keep thinking, what if that simple sneeze is the start of what can wipe us out?!

I’ve been inspecting our rabbits noses for about a month now, getting right up close and into their personal space as I try to peer into their nostrils. My husband finally told me I had to stop freaking the rabbits out like that or I couldn’t go into the rabbitry. Ha!

So today we vaccinated everyone except those who are midway through pregnancy or slated to be dispatched in the next few weeks. Tomorrow we go to a show and hope to be competitive with our newly strengthened herd.

I’ll be sure to keep you posted about our experiences with the Bunny Vac. So far, the vaccination of the herd was time consuming but painless.

Snuffles, or Pasteurella, is the Boogie Man of the rabbit world.

For the past two months I’ve had an over-riding fear in my gut about our rabbitry. I’ve been gobbling up knowledge on the Facebook rabbit groups, researching, and gaining information from my friends… I’ve been on high alert and on edge, ready to jump at the first sneeze from one of our rabbits.

Snuffles. What on earth is Snuffles and why is it so awful?!

Snuffles is a term for a rabbit virus called Pasteurellosis. It’s associated with colored snot and is the herald of death for a rabbit.

I recently learned that another rabbitry blog I follow is in the midst of a Pasteurellosis outbreak and has lost 75% of the rabbits in only days. He linked to a thread on RabbitTalk that covers how another rabbitry lost every rabbit in their herd over the course of three months after picking up one unknown bunny from the feed store and bringing it home. On one of my Facebook threads I’ve learned that rabbits brought to a national-level show were infected with the virus and sneezing. The rabbits exposed to those have returned to their homes all over the country and come down with snotting and sickness.

This stuff is serious. That’s Serious with a Capitol “S”.

My friend Lisa put together a great description of Snuffles and how and why it is so deadly to a rabbit. She said I could quote her here, so I will!

“Pasteurellosis is like an untreatable plague that can be prevented through culling and quarantine but it cannot be defeated or treated. All rabbits are carriers, normally. They show no symptoms because their body has kept the virus in check.

But a virus overload can happen when they are around other rabbits sick with snuffles because the virus overloads their system to the point where they can’t fight it … it’s like the parasite load gets to be too much and kills its host.

Think of it like an airborne bunny HIV or AIDs – it weakens the immune system to the point that any other virus that comes along – boom! – they’re dead. And because it’s so contagious you will definitely lose your herd if you don’t cull at the first sign of snot. Think of it like a smoker that constantly coughs and can’t breathe – the virus makes it so that the cilia that line their lungs become so damaged that little particles of dust, etc. can get lodged and cause major damage.

Rabbits have never shown a resistance to pasteurellosis so it doesn’t make sense to let snuffles “run its course” in hope of creating a rabbit with immunity. It’s in an area of the nose that doesn’t have much access to blood so it will propagate and continue to develop and be released into the blood stream.”

What makes this harder to get a handle on is that the Pasteurellosis infection is carried in pretty much all rabbits and is seen in practically all large-scale rabbitries and most of the smaller ones. It’s present in laboratories and wherever rabbits tend to congregate.

Here are a few things researchers have discovered about Pasteurella:

There is a treatment for rabbits, Baytril, which can mask the symptoms of Snuffles for awhile in a rabbit, but it looks like two injections a day and a price tag of approximately $75/month. It’s only available with a prescription and only recommended for pet homes where no one will be coming in contact with other rabbits.

A brand-new option is the Bunny Vac. I actually have ours on order and will vaccinate as soon as it comes. We are against putting medicines into our rabbits, but after weighing the options and our desire to take our rabbits to shows, it makes sense to vaccinate our herd. The BunnyVac works to boost the rabbit’s natural immunity and give the rabbits more time to build up their antibodies so they can fight the infection themselves. It’s rather groundbreaking and we hope that it works as promised – clinical trials have had 100% effectiveness in rabbits exposed to Pasteurella not succumbing shortly after. Here is a video with more information and here is a fact sheet put together off of a discussion on the ARBA Facebook page.

Here is a link to an article talking about different rabbit respiratory diseases. Not every sneeze and snot is Pasteurella – but really nothing that is a sneeze or a snot is good news for your rabbit.

A few things you can do to avoid a Snuffles outbreak in your herd:

These are pretty hard bits of advice, but this is a harsh disease that can wipe out a herd in a matter of weeks. Sacrificing one rabbit with quick action has the potential to save many other rabbits for the long term.