The Scoop on Poop 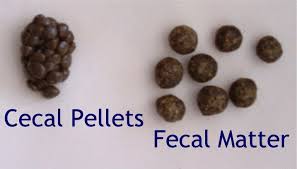 I just found this article on rabbit poop – I thought it was really interesting. Because, you know, poop is a really exciting topic and stuff.

The Scoop on Poop
By Charlcie Gill

Rabbits produce two types of droppings: fecal pellets and cecotropes. The latter are produced in a region of the rabbit’s digestive tract called the ceacum. The ceacum contains a natural community of bacteria and fungi that provide essential nutrients and possibly even protect the
rabbit from harmful pathogens. By consuming the cecotropes as they exit the anus, the rabbit takes in nutrient-packed dietary items essential to good health. Though often referred to as “night droppings”, cecotropes can be produced at almost any time of day.

Unlike the small brown “bunny marbles” we know as fecal pellets, normal CECOTROPES resembles a dark greenish brown mulberry, or tightly bunched grapes. Composed of small, soft, shiny pellets, each is coated with a layer of rubbery mucus, and pressed into an elongate mass.
Cecotropes have a rather strong odor, as they contain a large mass of beneficial cecal bacteria. When a rabbit ingests cecotropes, the mucus coat protects the bacteria as they pass through the stomach, then re-establish in the ceacum.

Diarrhea
True diarrhea is more common in young kits than older rabbits. One of the most common causes is coccidia. In a kit, dehydration caused by diarrhea can rapidly result in death. It is wise to consider incidences of diarrhea a true emergency. Common antibiotics used to treat coccidia
include Albon™ and the potentiated sulfas, such as Trimethoprim Sulfa (TMZ) or Bactrim™. Another cause of diarrhea in kits is stress at weaning. Very young rabbits have a sterile lower intestine until they begin to eat solid food at the age of 3-4 weeks. It is during this time that their intestines are at their most critical phase. Weaning too early or weaning under stressful conditions, can make kits susceptible to enteritis (inflammation of the intestinal lining), which can cause fatal diarrhea. When I wean kits, I always offer good grass hay. Adding rolled oats to the ration at a rate of 20% in relation to pellets for about a week is also a helpful preventative.

Unformed Cecotropes
The ceacum is a delicately balanced ecosystem. If the intestine is moving too slowly, or if the rabbit is getting a diet too rich in digestible carbohydrates and too low in crude fiber, the complex population of bacteria in the ceacum can become unbalanced.